The DBOC Index established in January 2021 tracks changes in the outlook of Danish companies with activities in China.

Complementary to the DBOC Index, the Danish Embassy and missions in China, The Danish Chamber of Commerce (DCCC), Danish-Chinese Business Forum (DCBF) and the Sino-Danish Center for Education and Research (SDC) jointly implements a comprehensive survey of Danish companies in China. The first edition was published in June 2020 while the data of the second survey was concluded in December 2021.

In light of the Russian invasion of Ukraine and the disrupting effects of the latest COVID-19 outbreak in Shanghai and China and the expected impact it will have on trade, supply chains, and companies in China and all over the world, an additional flash survey was conducted in order to supplement the initial findings. The survey was conducted between 18 April and 6 May.

This special edition, therefore, presents the findings of the add-on survey and a reflection on the results related to companies’ plans and expectations for the Chinese market post the Russian invasion of Ukraine and the latest COVID-19 outbreaks in China.

THE SIGNIFICANCE OF CHINA HAD BEEN GROWING UP UNTIL 2021

Using 2020 as a reference year, on average, more than a fifth of the turnover of the original respondents’ was created by their entities in China. In terms of progress, compared to two years prior, 62 pct. of the respondents believed that a higher share of their companies’ turnover was generated in China by the end of 2021. Correspondingly, at the time, only 13 pct. estimated that the percentage of their company’s global turnover generated in China was lower or significantly lower than 2 years ago.

Just below two-thirds of Danish companies in China indicated in December 2021 that the proportion of turnover generated in China would increase in the coming two years. On the other hand, less than one in ten expected the Chinese market to play a smaller role in the same time span.

When asked to reflect on the same question in April/May 2022 the number of respondents who expected that the proportion of turnover generated in China would decrease had grown from 10 pct. to 26 pct.

Thus, confidence in the Chinese market has clearly diminished following the Russian invasion of Ukraine and the latest COVID-19 outbreak in Shanghai and China. When asking the respondents to reflect on to what extent each of the two occurrences affected the companies’ expectations toward turnover generated in China in the next two years below figures clearly shows that both incidents have had a significant influence on the respondents’ expectations.

Almost seven out of ten of the surveyed companies indicate that the COVID-19 outbreak in March 2022 in Shanghai and China has deteriorated or significantly deteriorated their expectations towards future turnover in China in the next two years.

INVESTMENT PLANS PUT ON HOLD OR SCALED BACK

When the second survey in 2021 was conducted, the vast majority – two-thirds (down from three quarters in 2019) – of Danish companies planned to increase capacity investments in China significantly. Most companies expected the capacity increase to include more investment in both personnel and assets. Conversely, less than 6 pct. expected to decrease capacity in China. This indicated that Danish companies, at the time, still showed a strong commitment to the Chinese market, although the numbers had dropped slightly since the first survey was published in 2020.

Once again, the surveyed companies indicate that their confidence in the Chinese market has clearly declined following the Russian invasion of Ukraine and the COVID-19 outbreak in Shanghai and China. The proportion of companies that no longer plan to significantly increase capacity in China in the next two years has risen by 23 pct. points over the time span of only four months.

When assessing the root cause of the decline in investment plans then, similarly to the respondents’ expectation for future turnover, it is the COVID-19 outbreak in March in Shanghai and China, which has the largest effect, albeit both events still have a significant impact based on company feedback. That 48 pct. of companies indicate that the COVID-19 outbreak has a deteriorating or significant deteriorating effect on their plans to increase capacity in China is in stark contrast to the fact that in December 2021 only 5 pct. of all surveyed companies indicated plans to decrease capacity in the coming two years.

It is the latest COVID-19 outbreak and its spillover effects in Shanghai, which has the largest effect on companies’ increased supply chain challenges. This is not surprising given how decreased logistical capacity, has affected companies’ operations and their ability to receive components as well as to ship finished goods to customers in China and overseas. 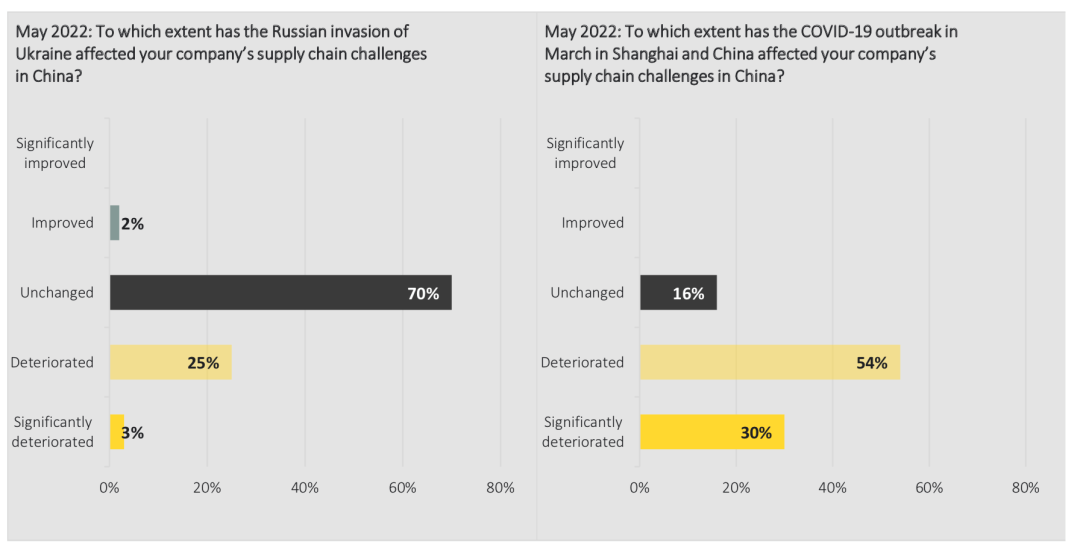